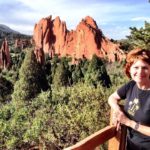 The Garden of the Gods is one of innkeepers Sallie and Welling Clark’s favorite places to visit when staying at Holden House. The Pikes Peak region offers spectacular scenery to explore, hike, bike, horseback ride, picnic and stroll through a place of local history. Another local park is Garden of the Gods sister, Red Rock Canyon Open Space, which can be accessed from U.S. Highway 24 west of 31st Street and across from Ridge Road.

Garden of the Gods is a park which is free and open to the public and owned by the City of Colorado Springs. It’s easy to spend just a few hours, take a drive through easy winding roads or create an afternoon adventure. Experienced rock climbers will know that you need to register first, but it’s a well-known place to try your rock climbing skills. The visitor’s center provides great views of the park entrance and an overview of its history in the region. A favorite overlook is on Mesa, just a street above 30th Street with a view of the entire park and a famous Pikes Peak view. 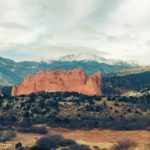 According to Wikipedia, the area now known as Garden of the Gods was first called Red Rock Corral by the Europeans. Then, in August 1859, two surveyors who helped to set up Colorado City (now “Old Colorado City historic district” explored the site. One of the surveyors, M. S. Beach, suggested that it would be a “capital place for a beer garden”. His companion, the young Rufus Cable, awestruck by the impressive rock formations, exclaimed, “BeerGarden! Why it is a fit place for the gods to assemble. We will call it the Garden of the Gods.”

The Garden of the Gods’ red rock formations were created during a geological upheaval along a natural fault line millions of years ago. Archaeological evidence shows that prehistoric people visited Garden of the Gods about 1330 BC. At about 250 BC, Native American people camped in the park; they are believed to have been attracted to wildlife and plant life in the area and used overhangs created by the rocks for shelter. There are many native peoples who have reported a connection to Garden of the Gods, including the Apache, Cheyenne, Comanche, Kiowa, Lakota, Pawner, Shoshone and Ute tribes.

Multiple American Indian Nations traveled through Garden of the Gods. The Utes’ oral traditions tell of their creation at the Garden of the Gods, and petroglyphs have been found in the park that are typical of early Utes. The Utes found red rocks to have a spiritual connection and camped near Manitou Springs and the creek near Rock Ledge 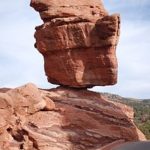 The famous local author, Helen Hunt Jackson, wrote of the park, “You wind among rocks of every conceivable and inconceivable shape and size… all bright red, all motionless and silent, with a strange look of having been just stopped and held back in the very climax of some supernatural catastrophe.”

The resulting rocks had different shapes: toppled, overturned, stood-up, pushed around and slanted. Balanced Rock, a fountain formation, is a combination of coarse sand, gravel, silica and hematite. It is hematite that gives the large balanced rock and its red hue. Balanced rock was formed as erosive processes removed softer layers near its base, eventually leaving the precarious-looking formation seen today. The Gateway Rocks Three Graces, and other outcroppings are sedimentary layers that had been pushed up vertically. The largest outcroppings in the park, “North Gateway”, “South Gateway”, “Gray Rock”, and “Sleeping Giant” are composed primarily of Lyons Formation, a stone made of fine sand from ancient sand dunes.

* Wikipedia was used as a resource for this article