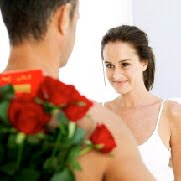 Make your reservations early for the month of February at Holden House 1902 Bed & Breakfast Inn, a Victorian B&B located in Colorado Springs, CO.  The best part is that you can celebrate Valentine’s Day all month long during February with great offers that help you plan your sweetheart’s gift of romance and packages sure to please.

According to Wikipedia, “Valentine’s Day or Saint Valentine’s Day is a holiday celebrated on February 14 by many people throughout the world. In the English-speaking countries, it is the traditional day on which lovers express their love for each other by sending Valentine’s cards, presenting flowers, or offering confectionery. The holiday is named after two among the numerous Early Christian martyrs named Valentine. The day became associated with romantic love in the circle of Geoffrey Chaucer in the High Middle Ages, when the tradition of courtly love flourished.”
And Wikipedia goes on to say, “The day is most closely associated with the mutual exchange of love notes in the form of “valentines”.  Modern Valentine symbols include the heart-shaped outline, doves, and the figure of the winged Cupid. Since the 19th century, handwritten notes have largely given way to mass-produced greeting cards. The sending of Valentines was a fashion in nineteenth-century Great Britain, and, in 1847, Esther Howland developed a successful business in her Worcester, Massachusetts home with hand-made Valentine cards based on British models. The popularity of Valentine cards in 19th century America, where many Valentine cards are now general greeting cards rather than declarations of love, was a harbinger of the future commercialization of holidays in the United States. It’s considered one of the Hallmark holidays.”

It’s not a surprise that worldwide, it’s estimated that one billion Valentines are mailed annually. Just behind Christmas card distribution, Valentine’s day is the second highest in terms of card distribution.  So, ladies and gentleman, here’s your opportunity to make your Valentine’s heart beat just a little faster with a gift of a “suite” heart deal in one of the Holden House’ beautifully appointed guest rooms, each complete with a luxurious bubble bath tub for two and fireplace.
VALENTINE HEARTS AND FLOWERS SPECIAL all through February!

Keep the fires of love lit all month long. Stay with us anytime during February and for just an additional $100, you’ll receive a bottle of French champagne and fresh flowers upon arrival, with breakfast delivered to your door on one morning of your stay in a beautifully appointed suite with fireplace and tub for two (bath bubbles included!).  For more great romantic specials visit our website at https://www.holdenhouse.com/  For a list of great activities, arts and culture for February or throughout the year, visit http://www.peakradar.com/

This luscious raspberry cordial is sure to add a touch of romance to your special Valentine celebration and set hearts a-fire! As an award-winning recipe from http://www.iloveinns.com/ 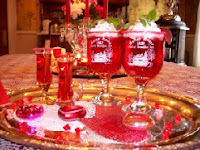 Combine vodka, brandy and sugar and stir until sugar is dissolved. Add raspberries and all remaining ingredients. Cover and shake well in a canning jar. Let stand at room temperature in a cool place (not in the refrigerator) for 2 months/8 weeks. Invert jar once a week. After 8 weeks, strain out raspberries and pour into decorative bottles for storage. When serving, use small cordial glasses and garnish with sprig of mint and whipped cream.
Quick cocktail method: Replace whole raspberries with 4 cups of raspberry juice and 1/4 cup blended fresh/frozen raspberries. Substitute 1/2 tsp. cinnamon powder for cinnamon stick. Set aside for several days prior to serving. Chill and shake well prior to serving in chilled martini or champagne flutes. Rim the glass with colored red or pink sugar and top with whipped cream, sprig of mint and cinnamon stick.